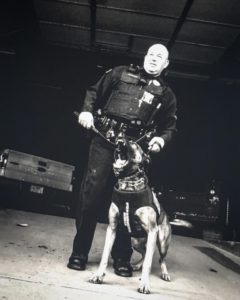 Hello. My name is Booker. However, it used to be Jary. You see, I am not originally from this country. I was born and raised in Belgium. After some time, when I got bigger, I was given a passport and sent to the United States of America. I arrived in Denver, Illinois with many others just like me to a training facility. Here we were trained by a man named Kenny. We all ate together, slept together, and trained together. This, however, was just the beginning of our training.

Some more time passed by and summer was slowly coming to an end. It was the beginning of August when my peers and I were lined up to be chosen for jobs. Two men approached me and asked Kenny some questions about me. After some talking, the two men chose me to join their police department. I went home with a human who called himself Clay. He was okay, but I just hoped he realized that I was the boss here, not him. We went home and I was greeted by a bunch of women. Clay’s wife, and his other companions, Ellie, Riley, and Avery. We stayed here for two weeks and then we were off to training once again.

One thing you should know about me is that I take my training very seriously. I want to be the best of the best. So when it was time for Clay and I to begin our training, I wanted to be better than everyone else- including him. Clay and I butt heads quite a bit during our training. He also thought he was the best and wanted to be the boss- yeah, right. However, the more and more time I had to spend with him and train with him, we had a nice, steady work relationship. We worked together as a team and became one of the best teams at the academy. I was able to find anything Clay was looking for, and I could take down even the biggest man in the room. I am very proud of how well Clay and I train together and even more proud when I am able to help Clay out on a case.

Once we graduated from the academy, we were finally working in the field, back in DuQuoin at the police station. I was so excited to get out on the field and show Clay and everyone else how much I had learned with my training. I remember our first big bust together like it was yesterday. Clay and I were approaching this car of a felon with an outstanding warrant. As Clay was talking, I couldn’t help but smell something suspicious coming from his car. Clay took me around the vehicle and let me smell the vehicle, searching for anything out of the ordinary. I picked up on not only a weapon but almost $30,000 dollars worth of cash that had some serious drug odor all over it. We arrested him and took him in to get booked.

Each day Clay and I go to work together, I know we mean straight business. We are aware of the sacrifice we are making yet that is what fuels us the most. We feed off of putting criminals in jail and keeping them off the streets. Clay and I make a very good team. I am always rewarded for my hard work.

Although I am very serious while on the job, I love to go home and play with the other dogs and Clay. I enjoy playing with Ellie, one of Clay’s labrador retrievers. Even though we are “off duty” I make sure I have my eyes on Clay at all times. Even when he goes to get the mail. I will protect him and the rest of my family with my life.

I’m extremely passionate and grateful for not only my job, but my co-workers at the DuQuoin Police Department, and my new family as well. It’s a risk every day hopping in the squad car, but it is truly an honor to be one of the few lucky to sit in that car and protect the streets with Clay. He is the best partner I could ever ask for. I truly am blessed to be a K-9 patrol dog.